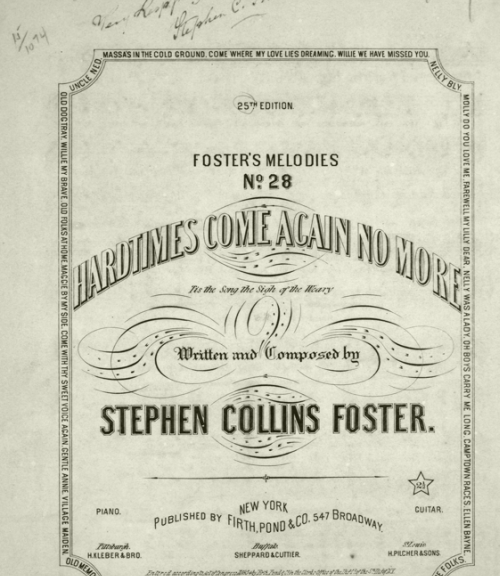 The term “Protest Music” is often used to describe songs that try to bring the listener’s attention to an issue the songwriter felt was important. But not all songs are obvious in their protest. Some songs point out a possible solution in a clever manner or simply point out the inequalities built into a society’s everyday norms. Others demean the oppressor.

My term, by no means the best, for this music is “News Music” and the following are mainly American examples from the 17- and 18-hundreds.

In 1776: when America’s revolutionary soldiers sang “Yankee Doodle Dandy” they were proudly and deliberately adopting to themselves a slur aimed at their uniform’s comparative lack of military sophistication.  A “doodle” was a fool and “macaroni” referred to a stylish wig—thus a failed attempt at ridiculing the colonists saying they were fools who would put a feather in their hat and think they had one of these wigs. [Wikipedia]

Riding on a pony;

He stuck a feather in his hat,

And called it macaroni

There’s little Tom Dacre, who cried when his head,
That curled like a lamb’s back, was shaved: so I said,
“Hush, Tom! never mind it, for when your head’s bare,
You know that the soot cannot spoil your white hair.”

And so he was quiet; and that very night,
As Tom was a-sleeping, he had such a sight, –
That thousands of sweepers, Dick, Joe, Ned, and Jack,
Were all of them locked up in coffins of black.
And by came an angel who had a bright key,
And he opened the coffins and set them all free;
Then down a green plain leaping, laughing, they run,
And wash in a river, and shine in the sun.

Then naked and white, all their bags left behind,
They rise upon clouds and sport in the wind;
And the angel told Tom, if he’d be a good boy,
He’d have God for his father, and never want joy.

And so Tom awoke; and we rose in the dark,
And got with our bags and our brushes to work.
Though the morning was cold, Tom was happy and warm;
So if all do their duty they need not fear harm

Many filmlovers are familiar with the song from Casablanca.  The German officers precede La Marseillaise with Die Wacht Am Rhein (The Watch/Guard on the Rhine) a mid-19th century

German patriotic song based on a poem. The poem was written in response to a perceived French threat to land (around the Rhine River) considered German.

In 1854:  “Hard Times Come Again No More” is a song by Stephen Foster. It was written in 1854 as Foster’s Melodies No. 28. Well-known and popular in its day, both in America and Europe, the song asks the fortunate to consider the plight of the less fortunate and ends with one of Foster’s favorite images: “a pale drooping maiden”.

Let us pause in life’s pleasures and count its many tears,

While we all sup sorrow with the poor;
There’s a song that will linger forever in our ears;
Oh hard times come again no more.

While we seek mirth and beauty and music light and gay,
There are frail forms fainting at the door;
Though their voices are silent, their pleading looks will say
Oh hard times come again no more.
There’s a pale drooping maiden who toils her life away,
With a worn heart whose better days are o’er:
Though her voice would be merry, ’tis sighing all the day,
Oh hard times come again no more.
Chorus

Tis a sigh that is wafted across the troubled wave,
Tis a wail that is heard upon the shore
Tis a dirge that is murmured around the lowly grave
Oh hard times come again no more

In 1860s: African Americans sang of their dream for freedom and equality before the Civil War, during it, and long after. Though its origin is sometimes disputed, Follow the Drinking Gourd is still thought of as a song used by “riders” on and “conductors” of the Underground Railroad system used to help slaves escape to safety and freedom by using coded directions. The “drinking gourd” likely refers to the North Star in the Little Dipper’s handle.

In 1944 it became the national anthem of the Soviet Union and is often still sung today as a worker anthem. Its lyrics are even more rousing than “La Marseillaise.” The first stanza is:

Stand up, damned of the Earth
Stand up, prisoners of starvation
Reason thunders in its volcano
This is the eruption of the end
Of the past let us make a clean slate
Enslaved masses, stand up, stand up
The world is about to change its foundation
We are nothing, let us be all
This is the final struggle
Let us group together, and tomorrow
The Internationale
Will be the human race

In 1990 singer Billy Bragg recreated the song: Stand up, all victims of oppression

For the tyrants fear your might
Don’t cling so hard to your possessions
For you have nothing, if you have no rights
Let racist ignorance be ended
For respect makes the empires fall
Freedom is merely privilege extended
Unless enjoyed by one and all

Chorus:
So come brothers and sisters
For the struggle carries on
The Internationale
Unites the world in song
So comrades come rally
For this is the time and place
The international ideal
Unites the human race

Let no one build walls to divide us
Walls of hatred nor walls of stone
Come greet the dawn and stand beside us
We’ll live together or we’ll die alone
In our world poisoned by exploitation
Those who have taken, now they must give
And end the vanity of nations
We’ve but one Earth on which to live

And so begins the final drama
In the streets and in the fields
We stand unbowed before their armour
We defy their guns and shields
When we fight, provoked by their aggression
Let us be inspired by life and love
For though they offer us concessions
Change will not come from above

See “Early 20th Century News Music” for next group or Mid-20th for another group.