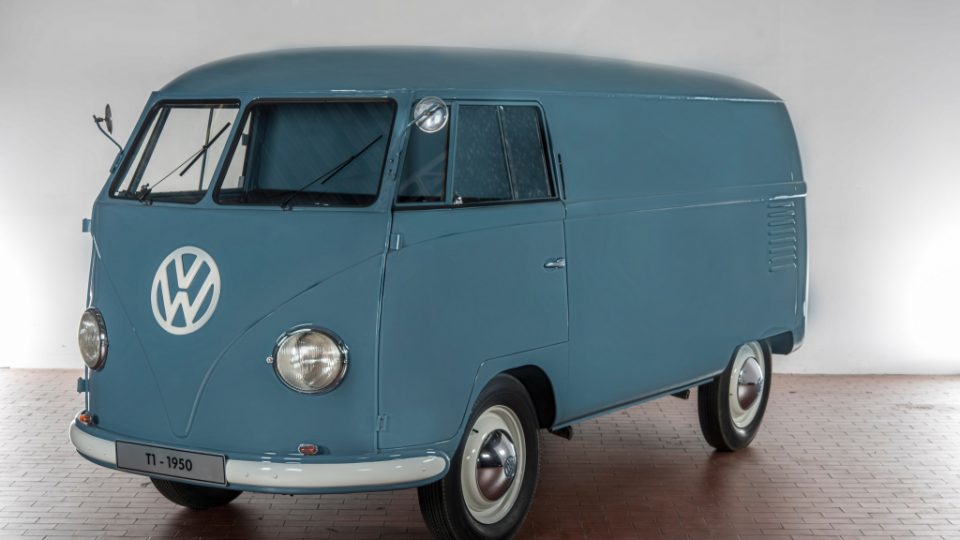 On March 8, 1950, the first Volkswagen Microbus went into production at a plant in West Germany. It was known as the Type 2, the sibling of the Type 1, the “Bug” as many came to know it.

The Type 1 had been the idea of Adolf Hitler in 1933. He wanted an affordable car that the people could afford, the “people’s car”– the Volkswagen. After the war, the company wanted to expand its product line. 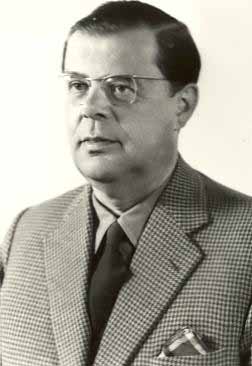 Ben Pon, a Dutch businessman,  came up with the idea for the Type 2 in 1947. He was visiting the VW factory (controlled by the British Occupational Forces) and saw a Plattenwagen–a flatbed truck used to move parts. 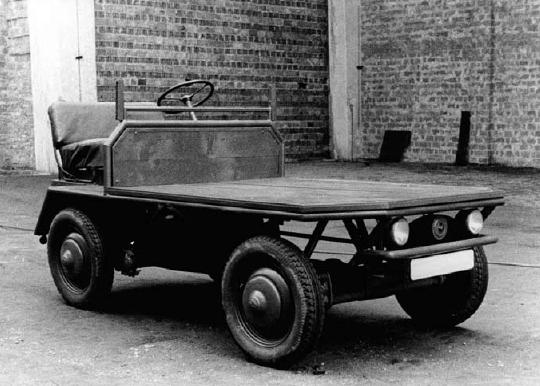 Pon thought a car could be added atop that truck’s chassis and sketched his idea. 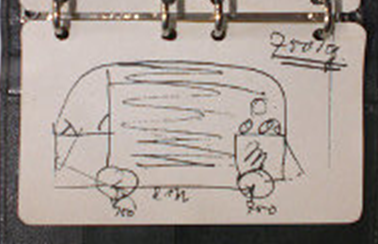 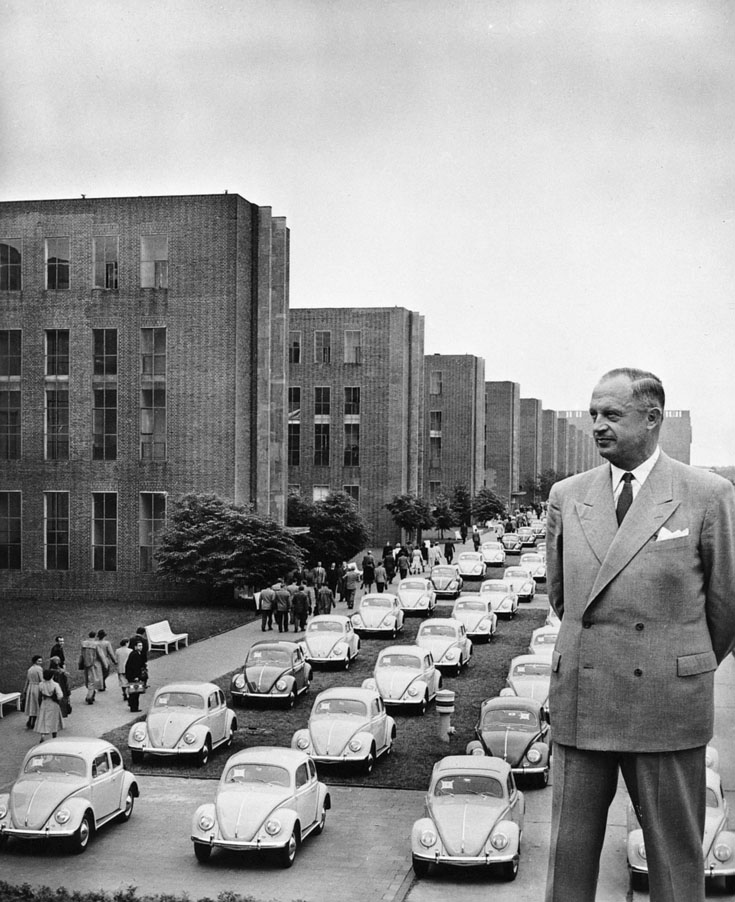 The factory’s British managers turned down Pons’s idea, but in 1948 Heinz Nordhoff became  Managing Director of the Volkswagen factory and revived proposal. Two prototypes were built.

The first had a flat front and its wind resistance proved to hinder the speed of the only 24 horsepower engine. A rounded front proved to work far better. The Type 2 Transporter was born. 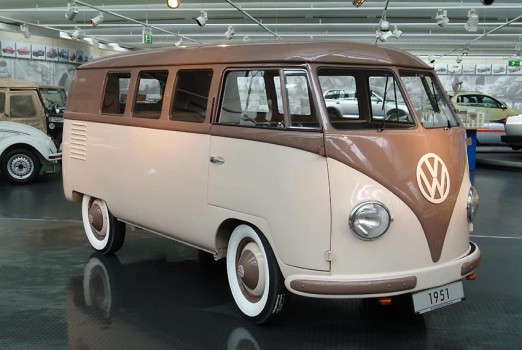 Later that year, the Samba went into production. It had windows all around and optional roof windows as well. Truth About Cars article 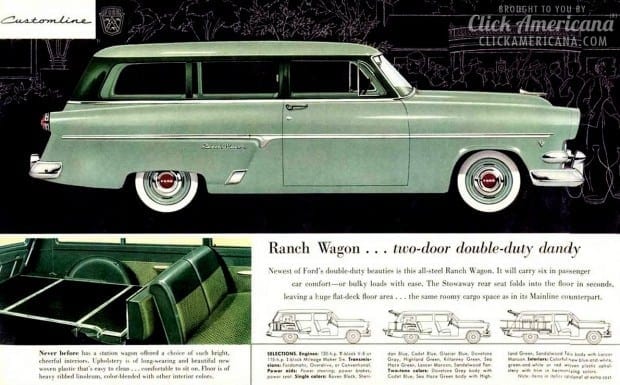 For 1950s Americans, the family car was typically the station wagon. Volkswagen’s marketing approach emphasized their car’s simple styling and usefulness as a vehicle for home, work and play. It could transport both humans and cargo. It had  roomy interior an air-cooled engine, ease of operation as well as maintenance. [Smithsonian article] 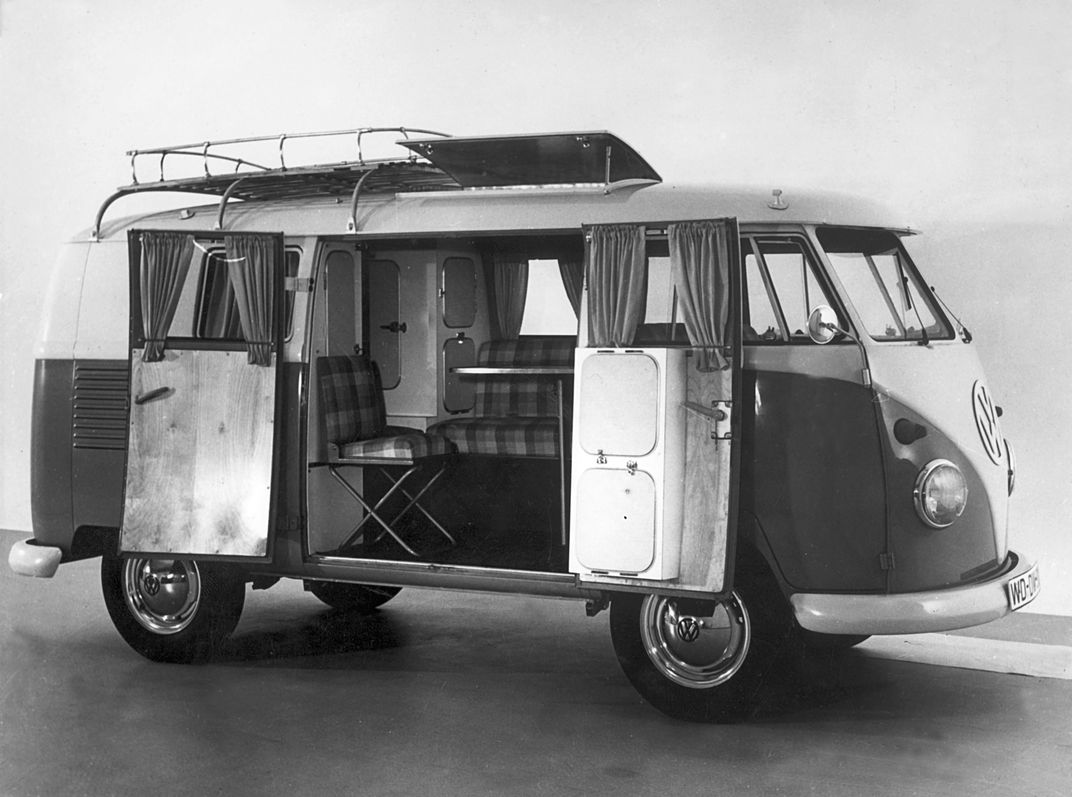 Some car enthusiasts had already began to customize their basic Bus model installing beds, sinks, and more. Volkswagen got the hint and in 1956 the company began to export Westfalia campers and that evolution enhanced the model’s attractiveness.

For some, the model became a symbol of the counterculture. So different than what Detroit produced and Detroit certainly represented Mainstream America.

Civil rights activists Esau and Janie Jenkins drove a 1966 VW Transporter to take African-American children to school and adults to work in the segregated South.

In addition to its use in the civil rights movement,  Baby Boomers saw the car’s usefulness.  Need to transport surfboards? Inside or on top…the Bus could handle it.

For many, the Bus’s main association is with the “Hippies” and how they decorated theirs inside and out. While the Merry Pranksters may have started things by transforming a school bus, transforming a VW bus was far less expensive and much easier.

Some of those who read this post responded with pictures of their VW Bus experiences.

When Jerry Garcia died in 1995, Volkswagen ran an advertisement: 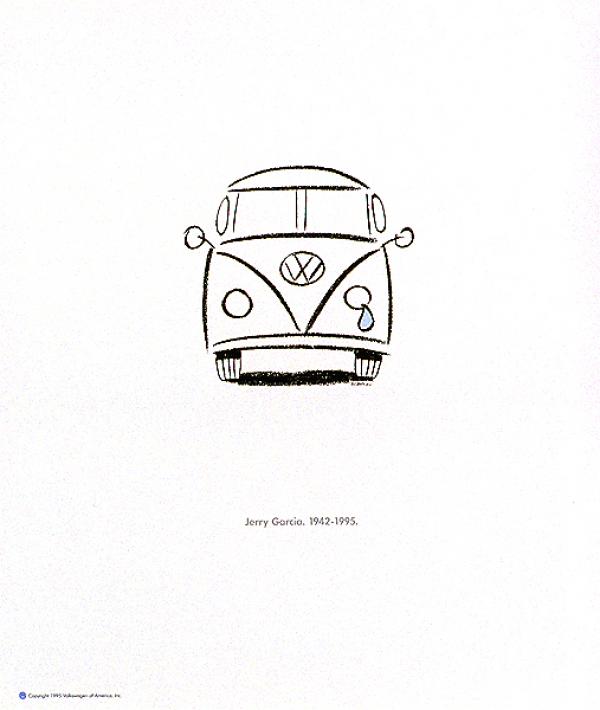 If its 2006 and you are Pixar and you are making an animated movie called Cars and you want to have a variety of characters why not have a VW Bus and name it, what else, Fillmore! 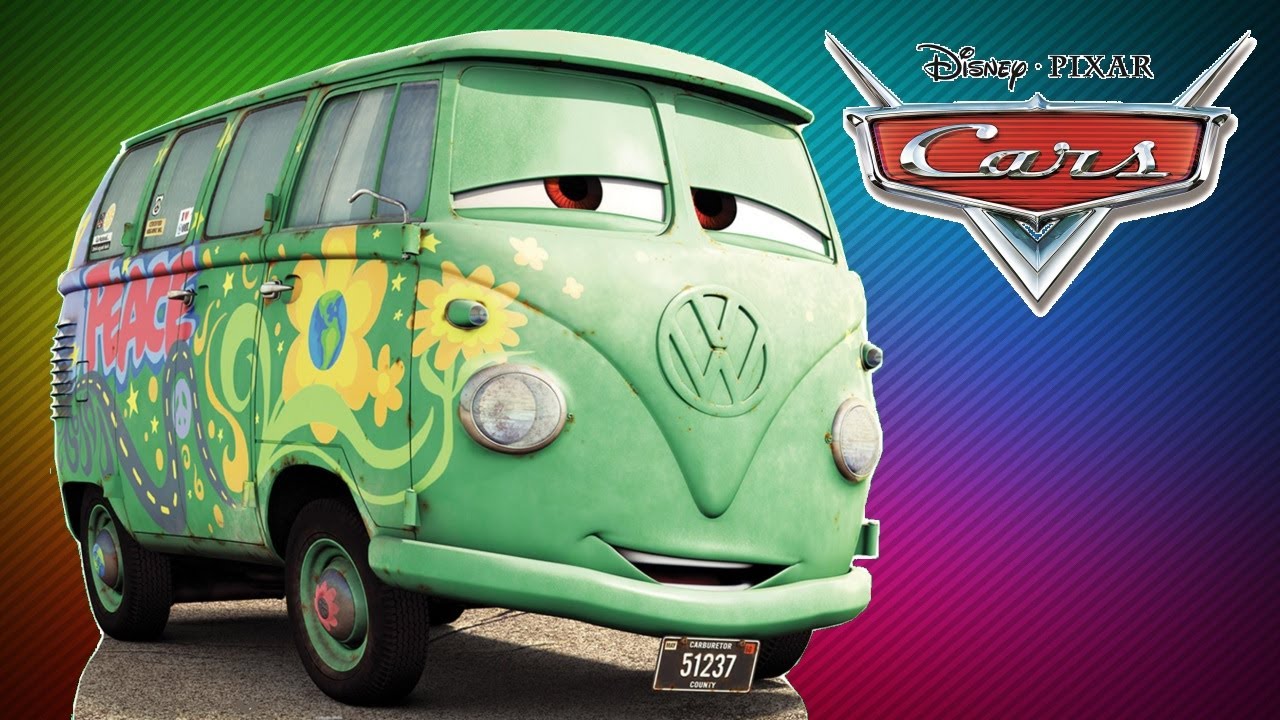 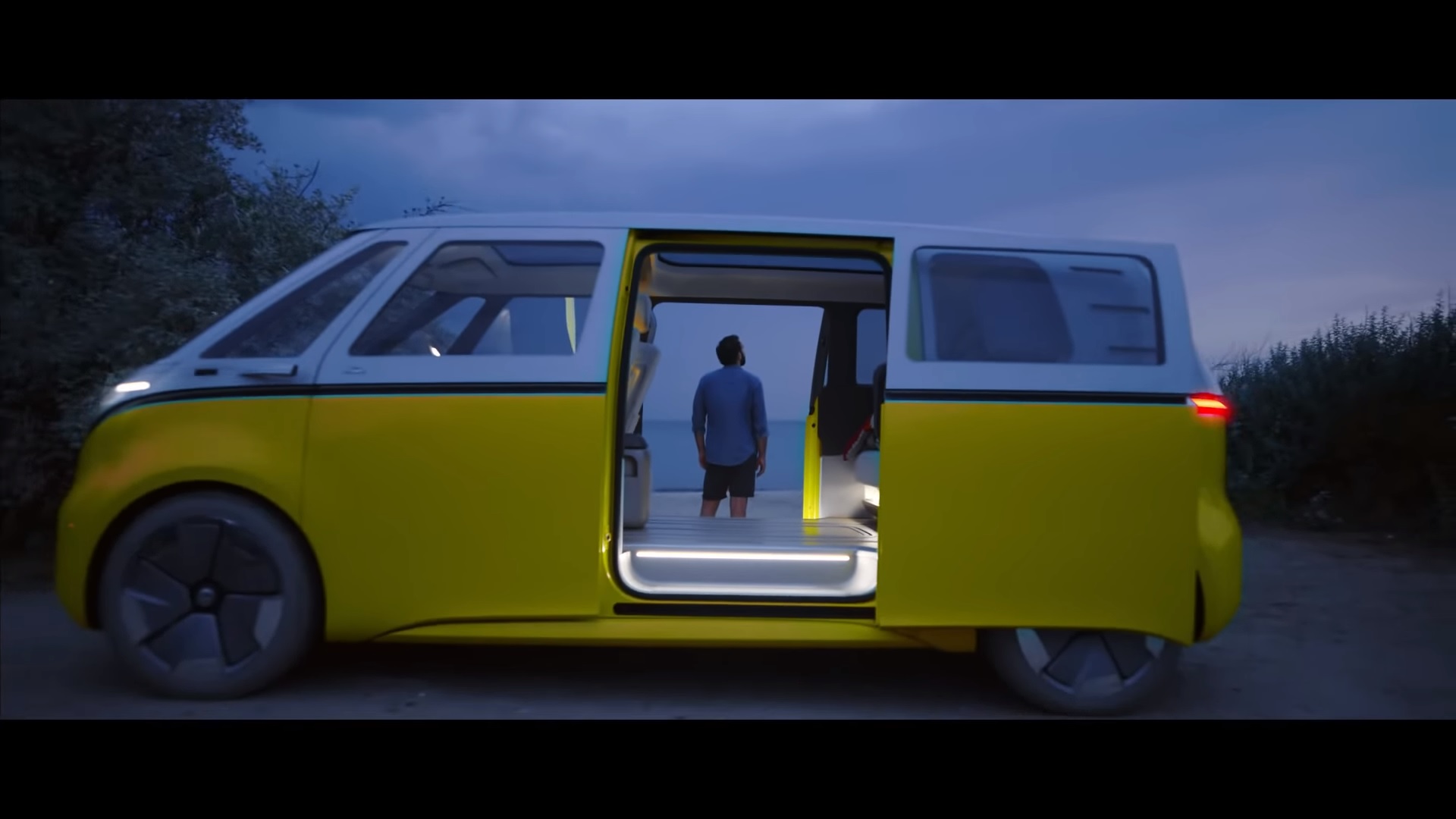 As Boomers aged their tastes changed, too. Production of the Bus stopped in 2014.

It is about to make a comeback. Tests of autonomous vehicles have begun in Germany and the first production EVs of this kind are expected to arrive in Europe by 2025.

The first MPV prototype based on the Buzz Concept should be completed by 2022, and may debut under the name ‘ID.7’ according to some sources.In 2022, VW will begin production of an electric Bus. It will be called the I.D. Buzz and will deliver 369 horsepower from electric motors on each axle.