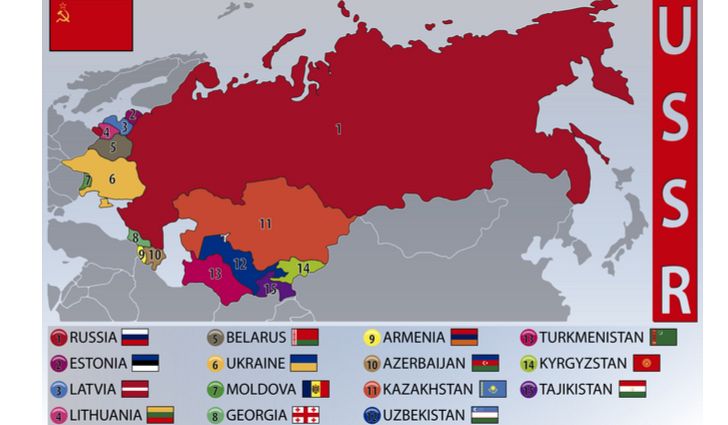 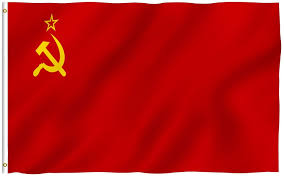 Long live our Soviet motherland,
Built by the people’s mighty hand.
Long live our people, united and free.
Strong in our friendship tried by fire.
Long may our crimson flag inspire,
Shining in glory for all men to see.

As Baby Boomers there was no greater enemy than the Soviet Union.   We stockpiled atomic weapons for the war that was sure to come. We put those weapons on top of rockets, in land bunkers, aboard submarines, ships, huge flying bombers, and secret places.

If a Boomer were a Catholic, then they prayed for the conversion of “Russia”  (easier than saying the Union of Soviet Socialist Republics) at the end of every Sunday mass.

If we wanted to label something an enemy, we said the person was a Communist, a Red, a -nik.

We had to keep Communism contained despite its spread into so many countries: eastern Europe, Cuba, central America, Africa, South America, and Asia.

On December 30, 1922 in post-revolutionary Russia, the Union of Soviet Socialist Republics (USSR) is established, comprising a confederation of Russia, Belorussia, Ukraine, and the Transcaucasian Federation (divided in 1936 into the Georgian, Azerbaijan, and Armenian republics). Also known as the Soviet Union, the new communist state was the successor to the Russian Empire and the first country in the world to be based on Marxist socialism.

Dissolution of a Nation

The economics, the politics, the many pieces that led to the dissolution of the USSR are more than this blog can cover. Dates are easier to list.

These dates include the withdrawal of the Soviet Union from the countries of eastern Europe. Countries that while not officially part of the USSR, were satellites of the vast Union.

Leaks in the dam

September 10, 1989: thousands of East Germans cross the Austria-Hungary frontier after Budapest waived border restrictions amid the largest legal exodus from eastern Europe since 1945.

November 17, 1989: riot police put down student protests against the communist government in Czechoslovakia. The incident started a series of non-violent protests that finally forced the communists from power two weeks later.

November 29, 1989: in response to a growing pro-democracy movement in Czechoslovakia, the Communist-run parliament ended the party’s 40-year monopoly on power.

December 17, 1989: Timișoara Riot in Romania. Demonstrations in the city of Timișoara were triggered by the government-sponsored attempt to evict László Tőkés, an ethnic Hungarian pastor, accused by the government of inciting ethnic hatred. Members of his ethnic Hungarian congregation surrounded his apartment in a show of support. Romanian students spontaneously joined the demonstration which had became a more general anti-government demonstration. Regular military forces, police and Security fired on demonstrators killing and injuring men, women and children.

December 19, 1989: workers in Romanian cities go on strike in protest against the communist regime.

December 21, 1989: Romanian leader, Nicolae Ceaușescu, spoke to crowd of the Socialist revolution’s chievements and Romanian “multi-laterally developed Socialist society.” Roughly eight minutes into his speech, several people began jeering, booing and whistling at him and shouting “Timișoara,” a reaction that would have been unthinkable for most of the previous quarter-century of his rule. As the speech wore on, more and more people did the same. He tried to silence them by raising his right hand and calling for the crowd’s attention before order was temporarily restored, then proceeded to announce social benefit reforms. The crowd continued to boo and heckle him.

December 22, 1989: the Romanian army defected to the cause of anti-communist demonstrators, and the government of Nicolae Ceausescu was overthrown. Ceaușescu and his wife Elena flee.

December 25, 1989: near Târgoviște, Romania the  Ceaușescus were court-martialled on orders of the National Salvation Front, Romania’s provisional government. They faced charges including illegal gathering of wealth and genocide. Ceaușescu repeatedly denied the court’s authority to try him, and asserted he was still legally president of Romania.

The Ceaușescus were executed by three of soldiers though reportedly hundreds of others also volunteered. The firing squad began shooting as soon as the two were in position against a wall. Before his sentence was carried out, Nicolae Ceaușescu sang “The Internationale” while being led up against the wall.

January 16, 1990:  in the wake of vicious fighting between Armenian and Azerbaijani forces in Azerbaijan, the Soviet government sends in 11,000 troops to quell the conflict.

The fighting–and the official Soviet reaction to it–was an indication of the increasing ineffectiveness of the central Soviet government in maintaining control in the Soviet republics, and of Soviet leader Mikhail Gorbachev’s weakening political power.

February 7, 1990: the Central Committee of the Soviet Union’s Communist Party agreed to endorse President Mikhail Gorbachev’s recommendation that the party give up its 70-year long monopoly of political power. The Committee’s decision to allow political challenges to the party’s dominance in Russia was yet another signal of the impending collapse of the Soviet system.

March 15, 1990:  the Soviet Union announced that Lithuania’s declaration of independence was invalid.

May 4, 1990: Latvia declared independence from the Soviet Union.

April 9, 1991: the Supreme Council of the Republic of Georgia declared independence from the Soviet Union.

August 20, 1991:  Estonia declares its independence from the Soviet Union.

August 21, 1991:  Latvia declares its independence from the Soviet Union.

August 29, 1991: after three hours of anguished debate, the Soviet Parliament voted to suspend all activities of the Communist Party pending an investigation of its role in the coup. It was an action that confirmed the demise of the old regime even as the search quickened for new forms of association and order. The fate of the party was already sealed before Parliament’s vote. Individual republics had closed its offices and seized its vast properties and funds and President Mikhail S. Gorbachev had quit as its General Secretary and had called on the leadership to step down. But Parliament was the only national institution with the formal powers to act against the entire organization, and its decision served to confirm the indictment already passed by the people. [NYT article]

August 31, 1991:  Kyrgyzstan and Uzbekistan declare independence from the Soviet Union.

September 9, 1991: Tajikistan declares its independence from the Soviet Union.

October 27, 1991: Turkmenistan declares its independence from the Soviet Union.

December 16, 1991: Kazakhstan declared its independence from the Soviet Union.

April 16, 2003: 10 countries signed  the 2003 Treaty of Accession admitting them to the European Union (EU). After Malta and Cyprus, eight of the ten new EU nations (Poland, Hungary, Slovakia, the Czech Republic, Slovenia, Estonia, Latvia, and Lithuania) were former communist countries. The signing of the treaty in Athens marked the first time that former members of the Soviet Bloc joined the EU.