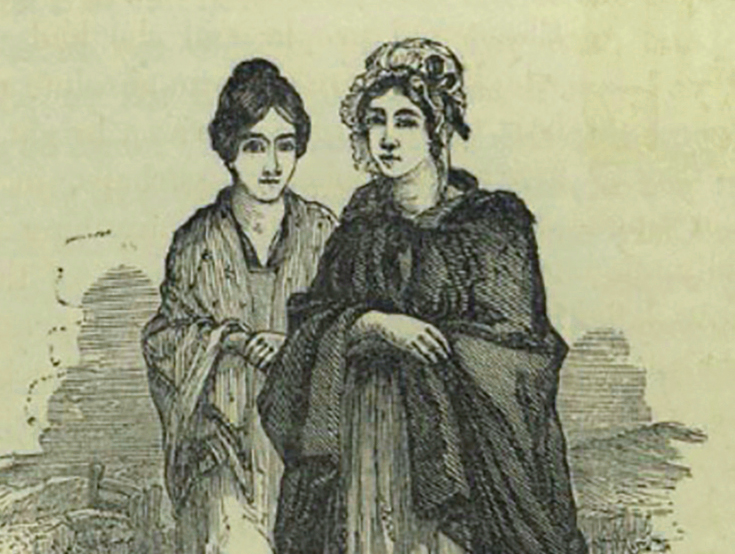 It was a common strategy of the Catholic Church to convert so-called pagans by converting their practices as well. Such was the case with December 26 and St Stephen’s Day.

The objectivicaton and casual abuse of women is as old as sex. The typically stronger male is able to force himself upon the life of females. The unequal punishment of women who were “guilty” of the same “crimes” as the men with whom they broke the law is far older than any Scarlet Letter. Ask any sex worker.

The Wrens of the Curragh, is the last cut on the outstanding Lankum album, The Livelong Day. It powerfully relates to such violent inequality. 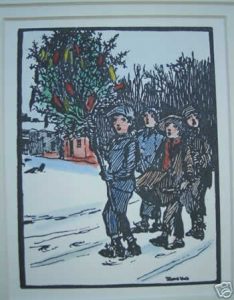 According to the Celtic lore, the wren symbolized action, accuracy, watchfulness and enthusiasm in life, yet in Ireland and England  wrenboys would hunt a wren, kill it, and visit homes on St Stephen’s Day (December 26) reciting a poem that asked for money to give the bird a proper burial. A feather from the wren might be offered to the patrons for good luck. 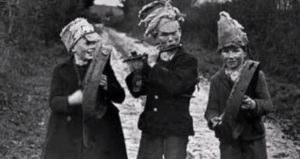 The wren, the wren, the king of all birds,
St. Stephen’s Day was caught in the furze,
Although he was little his honor was great,
Jump up me lads and give us a treat.

As I was going to Killenaule,
I met a wren upon the wall.
Up with me wattle and knocked him down,
And brought him in to Carrick Town.

Up with the kettle
And down with the pan,
And give us a penny
To bury the wren.

The song “Boys of Barr Na Sraide” also refers to wrenboys. It was based on a poem by Sigerson Clifford which includes the lines,

With cudgels stout they roamed about to hunt for the dreólín*
We searched for birds in every furze from Litir to Dooneen.
We danced for joy beneath the sky, life held no print nor plan
When the Boys of Barr na Sráide went hunting for the wren.

As childish and innocent as the tradition may seem at first (obviously disregarding the random killing of a bird), humans have the ability to turn ritual violent. The irrational rationalized.

According the the Slilgo Heritage site, Why, of all birds, is the inoffensive little wren chosen as the martyr for display by groups who take their name from it?   Because of its treachery, some claim!  When the Irish forces were about to catch Cromwells troops by surprise, a wren perched on one of the soldiers drums made a noise that woke the sleeping sentries just in time, thereby saving the camp.

Another explanation is that it ‘betrayed St. Stephen, the first Christian martyr, by flapping its wings to attract his pursuers when he was hiding’.  More say the hostility towards this most harmless of creatures results from the efforts of  clerics in the middle ages to undermine vestiges of druidic reverence and practices regarding the bird.  Medieval texts interpret the etymology of wren, the Irish for which is dreolín, as derived from ‘dreán’ or ‘draoi éan’ the translation of which is ‘druid bird’. 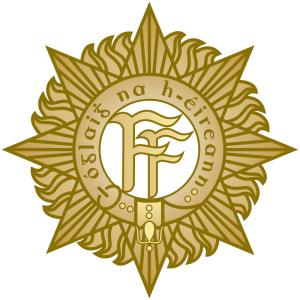 The Curragh Camp is an army base and military college located in The Curragh, County Kildare, Ireland. It is the main training center for the Irish Defence Forces and is home to 2,000 military personnel. It was built in 1855, but has been a military site for more than that.

During the Great Famine (an Gorta Mór) from 1845–1849, over a million Irish died and a million more emigrated .  Those numbers accounted for approximately 25% of the Irish population!

During the famine, women who didn’t die or emigrate still faced horrible choices. In 2017, Declan O’Rourke released the album Chronicles of the Great Irish Famine, thirteen songs that account the terrifying choices faced by the living.

Wrens of the Curragh 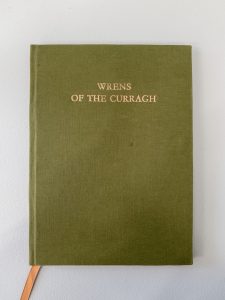 Some women chose to live in the furze-covered areas near Curragh Camp and became known as the wrens of the Curragh. They lived outdoors in literal burrows roofed over with gorse. They clubbed together as a band for protection because they were treated with such derision by everyone else.. They had hoped to find menial work, but often found that sex work was their only choice. It was a community of self-help with all sharing the little that they had.

Charles Dickens wrote in his essay,  “Stoning the Desolate“:

There are, in certain parts of Ireland and especially upon the Curragh of Kildare, hundreds of women, many of them brought up respectably, a few perhaps luxuriously, now living day after day, week after week, and month after month, in a state of solid heavy wretchedness, that no mere act of imagination can conceive. Exposed to sun and frost, to rain and snow, to the tempestuous east winds, and the bitter blast of the north, whether it be June or January, they live in the open air, with no covering but the wide vault of heaven, with so little clothing that even the blanket sent down out of heaven in a heavy fall of snow is eagerly welcomed by these miserable outcasts.  [Charles Dickens, All the Year Round, No 292, November 26, 1864]

Note well, the double standard regarding sex and one’s sex was as strong then as now. It was the woman whom society punished. The exploitive man’s behavior came under the category of exploits.

Their accounting of the Curragh Camp women takes a different tack regarding the plight of these hunted human wrens than the wrenboys did and too many still do. #metoo

For me, this is the most powerful indictment of the incredible and absolute mistreatment of women since Joni Mitchell’s musical account of Magdalene Laundries.