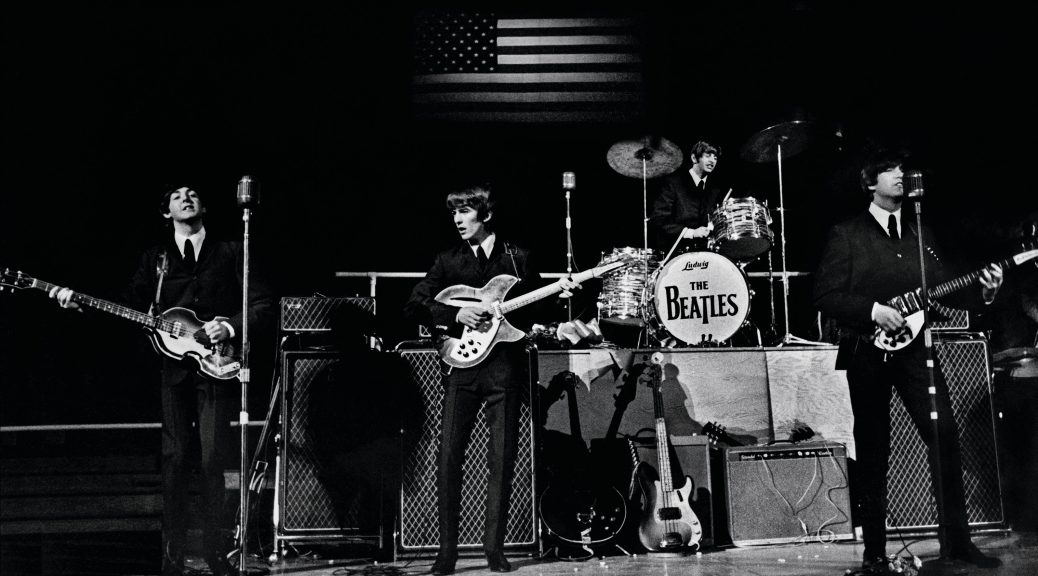 (The header picture–Beatles in Detroit, September 6, 1964 is from the cover of Chuck Gunderson’s book, Some Fun Tonight. See below)

On February 9, 1964 every living person  in the United States  watched the Beatles on the Ed Sullivan Show.  At least it seemed that way. The actual viewership estimated is 73 million people. There were 192 million people in the USA in 1964, so apparently “everyone” was only 40% of the population, but that ain’t bad.

The Beatles played live twice on the show: New York City on February 9 & and Miami on the 16th. CBS had recorded their third appearance on February 9, but held it until February 23. I didn’t realize it wasn’t live until decades later.

On February 11, in between New York and Miami, the Beatles had traveled by train (plane cancelled due to a snow storm) to Washington, DC and play live in the Washington Coliseum.  The next day, back in New York City, they played twice in Carnegie Hall.

They returned to Great Britain, took a break, then had a 5-venue April UK tour.

Before the band came back to North America, they began a world tour on June 4….Copenhagen. Three more shows in Europe. One in Hong Kong. Sixteen shows in Australia and New Zealand.  Then back to Europe for shows in England and Sweden.  30 shows total and the two-part tour didn’t end until August 16…Blackpool, England.

The band came back to North America for the summer 1964 tour which began on August 19 at the Cow Palace in San Francisco. Here is the complete list of that North American tour:

It was a grueling schedule. Each stop typically had a press conference after landing and the Beatles got to answer the same questions most reporters had asked the day before.

Chuck Gunderson wrote Some Fun Tonight. an amazingly thorough 2-volume book about the Beatles’ North American tours. Of the 1964’s end, he wrote: Before the plane took off, American Flyers Airline presented each Beatle with a black note-book that contained a detailed route map, flight itineraries, and a list of the tour cities and dates. All told, the Beatles had flown 22,441 miles since leaving London. In North America alone, they’d covered 13,645 miles in the air. and logged forty-one hours and twenty-one minutes of flying time…”

Gunderson added: “The tour was a huge success, and [Brian] Epstein informed reporters…that it had raked in over a million dollars–$1,187,623.80 before expenses.