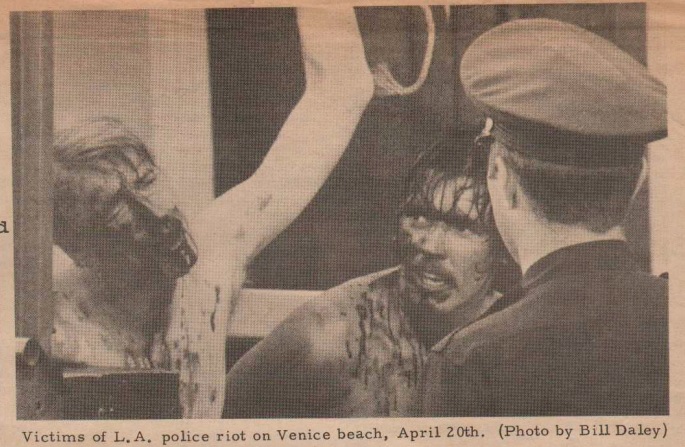 The third “festival” of 1969 was the LA Free Press Festival. I qualify the word festival because organizers planned only a one-day event and typically a festival was a multi-day event. Having said that, it is important to keep in mind that although it was only one day, there were a number of groups for whom this event was simply one of a series in Venice aimed at controlling what they saw as uncontrolled development of the area.

California was the birthplace of rock festivals whether they be called festivals, be-ins, fairs, or whatever. The 1967 Summer of Love had demonstrated the counter-culture’s positive and negative characteristics.

For the most part, the peaceful gatherings where youth enjoyed their music and other types of entertainment presented no disruptive issues to local governments. When the gatherings interfered with the everyday lives of other residents or when local law enforcement viewed (for any number of reasons) the youth’s behavior as immoral and illegal, conflict resulted. 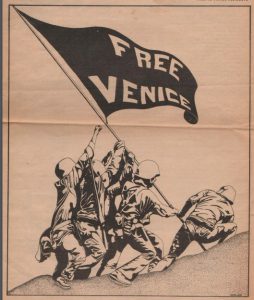 The LA Free Press–The Los Angeles Free Press–(also called “the Freep”)  was an underground newspaper of the 1960s, perhaps the first of that type.  Art Kunkin edited and published it weekly.

Unlike  the other 1969 festivals, the Free Press’s was to be both musical and political.

Venice had been an independent city until it merged with Los Angeles in 1926.  According to its site, “Venice has always been known as a hangout for the creative and the artistic. In the 1950s and 60s, Venice became a center for the Beat generation. There was an explosion of poetry and art. “

There is not much about who was scheduled to play. Country Joe and the Fish were there. In the book the place of music edited by Andrew Leyshot, David Matless, and George Revill, it reads, “In April 1969 Venice Beach hosted its first free concert, attempting to build upon the success of Be-Ins in the previous two years. In the mythology of L.A., the “Beach” was considered an ideal ecology of life for such revelry.”

The times were one that the hum of confrontation between law enforcement and youth was a constant presence. Apparently a thrown bottle lighted the fuse that led to the incident. One of the lessons that Woodstock Ventures learned from this and other similar incidents was to avoid having an law enforcement presence on site.

Tales of a Blue Meanie

Allan Cole from his book, Tales of a Blue Meanie, chapter 8, Riotous Behavior, described some background: Circus Saul [Blumenthal] and Fish Face [Sam] were radical capitalists – that’s what they called themselves, anyway. They hated LBJ, despised Richard Nixon even more and had pledged ten thousand dollars each to the newly formed organization “Businessmen For Peace.” They also vowed to stage various concerts up and down the state to raise awareness and funds for their cause.

Confessions of an Unapologetic Hippie

Phil Polizatto wrote in Confessions of an Unapologetic Hippie:

It was supposed to be a love-in/anti-war gathering. Right there on that expanse of beach between Pacific Ocean Park and where Venice proper started. The line up consisted of Spirit, Nitty Gritty Dirt Band, and Taj Mahal, interspersed with anti-war speeches. For a change, we would be on the stage itself and not on scaffolds. Still, it was just more go-go dancing. And we’d be doing it for free just like all the other entertainers….

It was a wonderful day. Everyone was on a high. Spirit really got everyone on their feet. Dancing. Swaying. Gettin’ down! The speeches were empowering and solidified the crowd’s resolve against the war. They knew that the threat from the outside was now and forever a lie. They knew that the country had better start thinking in a new way. And they knew that these rallies were meant to attract the media and make people pay attention. They needed a venue where their opposition could be clearly seen and loudly heard. So they rose to the occasion and hooted and whistled and hollered at the top of their lungs in response to buzz words that echoed through the loudspeakers. But the crowd was there as much for the music as they were to make a statement. They were there to have a good time and have some fun.

A threatening police presence, a bottle perhaps thrown, and “Suddenly it was chaos. Clubs cracking skulls. Kids screaming and being trampled by both the cops and the crowd. Some people putting up a fight. Guys trying to rip the masks from the cops’ faces to get something to punch at. Feisty women kicking and biting their assailants. Kids trying to hang on to, but then violently bucked off, the bronco legs of police who were trying to pummel their dads. Lots of bleeding. Lots of pleading. “ 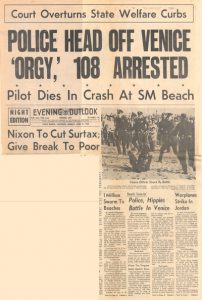 A local paper reported the next day that police moved in because of a planned orgy: “The plan was for people to form a huge circle around a couple on the beach who would have intercourse. Slowly, other couples would join in, [police Capt. Robert] Sillings said his reports revealed. One couple was arrested for lewd conduct after the girl danced topless while her partner fondled her, police said. The girl reportedly was told to put on her top several times and was arrested when she refused. Sillings said there were “numerous incidents” of girls peeling off their bathing suits. Six officers were injured by flying rocks and bottles and at least a dozen other people were hurt in fist fights and by broken glass. A dozen ambulances went to the scene during the day. The violence broke out late in the afternoon when officers attempted to arrest several individuals on suspicion of possession of marijuana and public intoxication.”