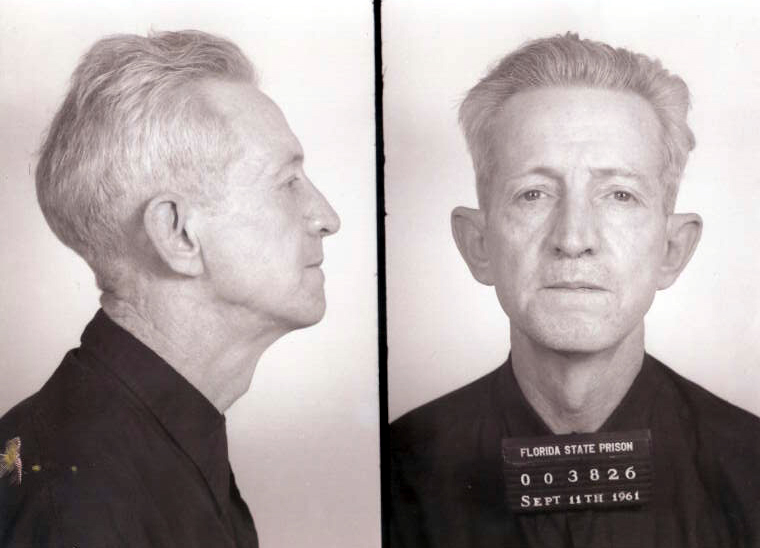 Clarence Earl Gideon was born in Hannibal, Missouri on August 30, 1910. His father died when Clarence was three. His mother remarried, but Clarence and his step father did not get along.

When he was 14, Clarence ran away for a year.

Back in Missouri, but not with his mother, he stole clothes, got caught, and his mother asked to have him put into a reformatory.

He was released after a year and had the scars to prove the mistreatment he received there.

Gideon married and got a job in a shoe factory.  He lost his job and after committing a number of crimes in Missouri was sentenced to ten years for robbery.

He was paroled but continued to run afoul the law.  According to an article in the National Association of Criminal Defense Lawyers, “In 1934, he was convicted of theft of U.S. government property and conspiracy and sentenced to three years in Fort Leavenworth, where he was assigned to the shoe factory. In 1939, he was arrested on an unknown charge and again escaped from jail before trial. In 1940, he was convicted of burglary and larceny and sentenced as a repeat offender. In 1943, he escaped from prison and went to work on the Southern Pacific Railroad as a brakeman, using an assumed name and forged Selective Service card. The following year he was arrested on a tip, convicted of escape, and imprisoned until January 1950. In 1951, he was convicted of an unspecified crime in Texas and served 13 months.” Gideon moved to Florida. On June 3, 1961, $5 in change and a few bottles of beer and soda were stolen from Bay Harbor Pool Room (Panama, FL), a pool hall that belonged to Ira Strickland, Jr.

Henry Cook, a 22-year-old resident who lived nearby, told the police that he had seen Clarence Earl Gideon walk out of the hall with a bottle of wine and his pockets filled with coins and then get into a cab and leave. Gideon was arrested in a tavern.

August 4, 1961:  being too poor to pay for counsel,  Gideon requested that the court appoint one.  Because of his extensive criminal record, he was familiar with that practice.

Robert McCrary, Jr, the trial judge, denied the request stating that in Florida a defendant was entitled to a court-appointed defense only in capital offense trials.

Though Gideon was mistaken is his assumption that he was entitled to a court-appointed lawyer, McCrary was also mistaken in that he could have, had he decided, appointed a lawyer.

Defending himself,  Gideon was tried and convicted of breaking and entering with intent to commit petty larceny.

Gideon appealed his conviction to the Florida Supreme Court. That court denied his appeal.

Gideon mailed a five-page hand-printed petition to the US Supreme Court asking the nine justices to consider his complaint.

It is often discussed whether, despite his familiarity with the justice system, Gideon could have written the petition himself.  Some have suggested that Gideon’s cellmate, Joseph A. Peel Jr, a lawyer and judge serving time for murder, had assisted Gideon.

January 5, 1962:  Whatever the circumstances, the Supreme Court, in reply, agreed to hear his appeal. Originally, the case was called Gideon v. Cochran.

January 15,  1963:  the Gideon v. Cochran case was argued at the US Supreme Court. Abe Fortas was assigned to represent Gideon. Bruce Jacob, the Assistant Florida Attorney General, was assigned to argue against Gideon.

Fortas argued (a recording of Fortas’s argument can be heard via the Oyez site)  that a common man with no training in law could not go up against a trained lawyer and win, and that “you cannot have a fair trial without counsel.”

Jacob argued that the issue at hand was a state issue, not federal; the practice of only appointing counsel under “special circumstances” in non-capital cases sufficed; that thousands of convictions would have to be thrown out if it were changed; and that Florida had followed for 21 years “in good faith” the 1942 Supreme Court ruling in Betts v. Brady.

March 18, 1963: the US Supreme Court unanimously ruled that, The Sixth Amendment right to counsel is a fundamental right applied to the states via the Fourteenth Amendment’s due process clause, and requires that indigent criminal defendants be provided counsel at trial. Supreme Court of Florida reversed.

About 2,000 convicted people in Florida alone were freed as a result of the Gideon decision; Gideon himself was not freed. He instead got another trial. (NYT article)

August 5, 1963: Gideon had chosen W. Fred Turner to be his lawyer for his second trial. Turner picked apart the testimony of eyewitness Henry Cook. Turner also got a statement from the cab driver who took Gideon from Bay Harbor, Florida to a bar in Panama City, Florida, stating that Gideon was carrying neither wine, beer nor Coke when he picked him up, even though Cook had testified that he watched Gideon walk from the pool hall to the phone, then wait for a cab.

The jury acquitted Gideon after one hour of deliberation.

November 1, 1963: in a speech before The New England Conference on the Defense of Indigent Persons Accused of Crime, Attorney General Robert Kennedy stated: “If an obscure Florida convict named Clarence Earl Gideon had not sat down in prison with a pencil and paper to write a letter to the Supreme Court, and if the Supreme Court had not taken the trouble to look for merit in that one crude petition among all the bundles of mail it must receive every day, the vast machinery of American law would have gone on functioning undisturbed.” January 18, 1972: after his acquittal, Gideon resumed his previous way of life and married again. He died of cancer in Fort Lauderdale, Florida at age 61. Gideon’s family in Missouri accepted his body and buried him in an unmarked grave. April 30, 1980: made for TV movie and a Hallmark Hall of Fame presentation, Gideon’s Trumpet, aired on CBS. The moved starred Henry Fonda as Clarence Earl Gideon, José Ferrer as Abe Fortas and John Houseman as Earl Warren (though Warren’s name was never mentioned in the film; he was billed simply as “The Chief Justice”). Houseman also provided the off screen closing narration at the end of the film. Lewis himself appeared in a small role as “The Reporter”.

November 1984 The local chapter of the American Civil Liberties Union added a granite headstone, inscribed with a quote from a letter Gideon wrote to his attorney, Abe Fortas: “I believe that each era finds an improvement in law for the benefit of mankind.”

March 16, 2013: approaching the 50th anniversary of  Gideon v. Wainwright, a NYT article stated, the Legal Services Corporation, the Congressionally financed organization that provides lawyers to the poor in civil matters, says there are more than 60 million Americans — 35 percent more than in 2005 — who qualify for its services. But it calculates that 80 percent of the legal needs of the poor go unmet. In state after state, according to a survey of trial judges, more people are now representing themselves in court and they are failing to present necessary evidence, committing procedural errors and poorly examining witnesses, all while new lawyers remain unemployed… According to the World Justice Project, a nonprofit group promoting the rule of law that got its start through the American Bar Association, the United States ranks 66th out of 98 countries in access to and affordability of civil legal services.