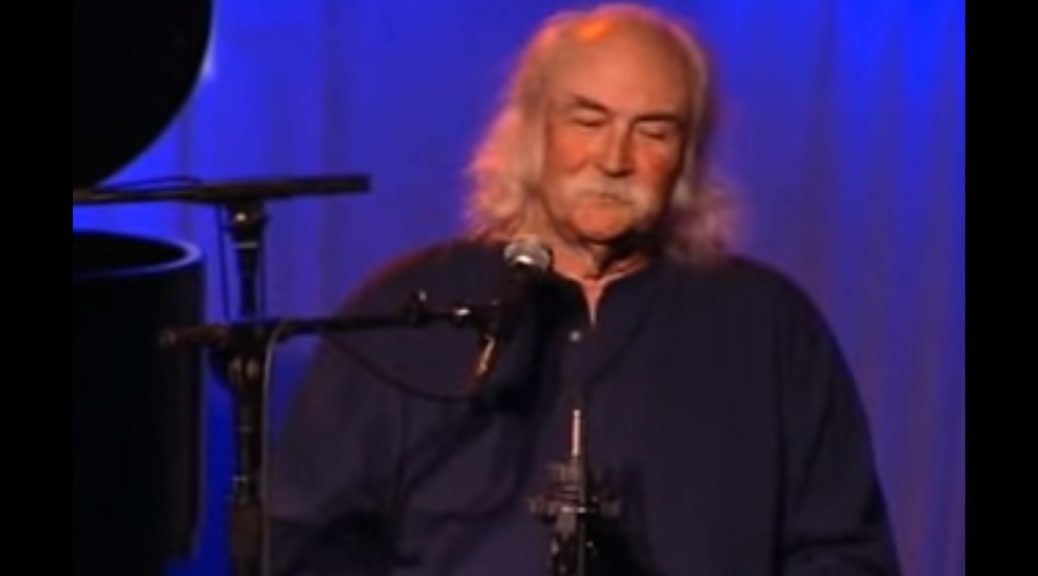 Wherever one stands regarding David Crosby, we cannot deny that he has, at the least, been in the right places at the right times.

He was born in Los Angeles and like so many artistically-inclined young people, found the conventional educational system discomforting. He enjoyed and participated in art programs offered by schools, but the traditional “Three Rs” not so much.

He graduated from high school via correspondence and eventually found his way to Greenwich Village at the same time that that young man Bob Dylan was there.

As his musical abilities grew, particularly regarding vocal harmonies, he went back west and became part of what would become the Byrds with Jim (later Roger) McGuinn and Gene Clark. They called themselves the Jet Set.

Most are aware that their 1965 cover of Bob Dylan’s “Mr Tambourine Man” put the Jet Set, now the Byrds, on the musical map. The Byrd’s sound we first think of is McGuinn’s 12-string guitar, but the Crosby-influenced harmonies stand strong beside it.

Artistic differences led to an erosion of Crosby’s and other band members’ cohesion. Crosby, in particular, became more vocally political. Not unusual at the time, of course.

In mid-1967 Crosby and the Byrds separated.

Crosby and then Buffalo Springfield’s Stephen Stills had become friends and when Springfield broke up, the two hung out more together. Together with ex-Hollies Graham Nash, the three formed the now legendary Crosby, Stills and Nash (no Oxford comma).

While “it was only there second gig, man” at the Woodstock Music and Art Fair, that appearance, their critically acclaimed first album, and the addition of Neil Young combined to again put Crosby in the middle of a musically successful maelstrom.

C, S, N (and sometimes Y) continued as a solid unit into the early 1970s with each of them doing solo work as well.

Once again artistic differences let to a breakup that have occurred regularly since.

In April, Graham Nash and Crosby had a falling out. Among his many comments, Nash reportedly said, ““I don’t like David Crosby right now. He’s been awful for me the last two years, just fucking awful…. I’ve been there and saved his fucking ass for 45 years, and he treated me like shit. You can’t do that to me. You can do it for a day or so, until I think you’re going to come around. When it goes on longer, and I keep getting nasty emails from him, I’m done. Fuck you. David has ripped the heart out of Crosby, Stills, Nash and Young.”

Critical comments by Crosby regarding Neil Young’s wife Daryl Hannah also led to a Crosby-Young rift, though Crosby did apologize.

In 2014, Crosby released his first solo album in 21 years, “Croz,” which debuted in the Billboard Top 40. It ushered in one of the most prolific periods in his career, in which he released five solo albums, the last, “For Free,” in 2021.

He is one of the columns in the 1960s Pantheon of counter cultural music,

Crosby is in the Rock and Roll Hall of Fame twice: as a Byrd and a member of C, S, N and Y.

Crosby died on January 18, 2023 after a long illness [NYT obituary]