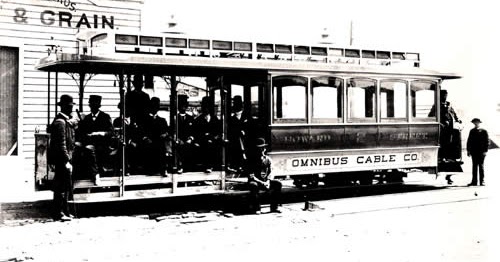 Associating bus travel and luxury is not the case, unless one is a star musician.  And for those stars, one of their roadies once told me, “Travelling down a highway in a steel tube at 75 mph is not luxurious.”

In other words, the huge majority of people taking bus transportation are doing so for its necessary convenience not its Lucullan comfort.

Charlotte Brown was born in Maryland in  1839.  James E Brown, her father, had been a slave. Her mother, Charlotte, was a free seamstress who had purchased James’s freedom.

With California having just made slavery illegal in 1949, the Brown family moved to San Francisco during its Gold Rush. James, an ardent abolitionist,  ran a livery stable and was a partner in Mirror of the Times, a black newspaper.

On the evening of April 17, 1863, Charlotte had a doctor’s appointment and boarded a Omnibus Railroad and Cable Company streetcar.  The conductor, collecting tickets, came to Charlotte, refused to take her ticket, told her to get off the car, and when Charlotte refused, forcibly removed her saying Blacks were not allowed on the cars.

From a Wherever There’s a Fight article:  Brown recalled, “He took hold of me, by the left arm, somewhere. I made no resistance as he had taken me by the arm. I knew it was of no use to resist, and therefore I went out, and he kept hold of me until I was out of the car, holding on to me until I struck the walk.”

From KQED Rebel Girls:  [filing suit was a brave reaction] ...given that it had only been a matter of months since African Americans in California had gained the right to testify against white people in court. During the case, Omnibus defended its racist policies, arguing that people of color should not be permitted to ride streetcars in case they made white women and children feel “fearful or repulsed.”

While Charlotte ultimately won the case and was awarded $25 and costs, appeals by Omnibus kept her tied up in court for months. The end result saw her award sum reduced to just five cents, the cost of Charlotte’s original ticket. What’s more, the case did not change Omnibus policy.

Just days after the first case was finally over, Charlotte was removed from another Omnibus streetcar.

Charlotte and her father went straight back to court, this time finding themselves arguing in front of a very sympathetic judge. Judge Orville C. Pratt of the 12th District Court deemed segregation “barbaric” and awarded Charlotte $500.

in his opinion: “It has been already quite too long tolerated by the dominant race to see with indifference the Negro or mulatto treated as a brute, insulted, wronged, enslaved, made to wear a yoke, to tremble before white men, to serve him as a tool, to hold property and life at his will, to surrender to him his intellect and conscience, and to seal his lips and belie his thought through dread of the white man’s power.” [from a Black Then article]

Though Pratt’s ruling would suggest that San Francisco’s Black residents could now ride the streetcars, that was not the reality. Refusals continued.

In 1866  a conductor on the North Beach Municipal Railroad refused to pick up Mary Ellen Pleasant.

She sued, and a jury awarded Pleasant five hundred dollars in punitive damages. The streetcar company appealed the decision to the California Supreme Court. The high court ruled streetcar exclusion based on race was unlawful, but it also rescinded the damage payment to Pleasant, since there was no proof “to show willful injury,” or any proof that the streetcar company had a policy of excluding blacks.

The lawsuits succeeded in changing the racist practice: no more stories about streetcar exclusion appeared in the local black press, which had reported all such incidents vigilantly. In 1893 the legislature enacted a statewide prohibition on streetcar segregation and exclusion. [also from Wherever There’s a Fight site]