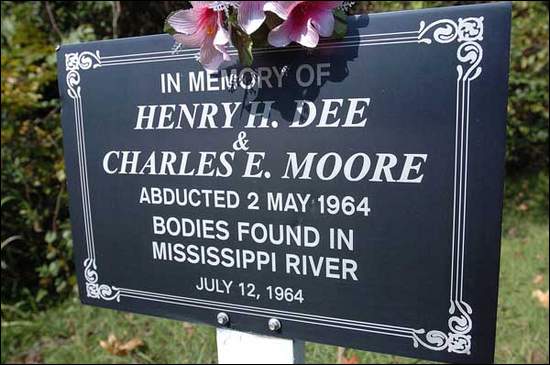 May 2, 1964:  Henry Hezekiah Dee and Charles Eddie Moore (both 19) were hitchhiking on a highway near Meadville, Mississippi. James Ford Seale, believing that they were black activists, kidnapped them  and took them to the Homochitto National Forest where he, with the assistance of other KKK friends he’d contacted, tied them to a tree and beat them.

After the beating, the group put Dee and MooreHe two into a car trunk drove to them to the Ole River in Tallulah, LA. The men put  Dee and Moore into a row boat, wrapped them in plastic, tied an engine block and RR track to them, and dumped them, still alive, into the river where they died.

July 12, 1964: while looking for the bodies of  the three missing civil rights workers, Michael Schwerner, Andrew Goodman, and James Chaney, searchers discover the disarticulated lower torso of Charles Moore in the river south of Tallulah, Louisiana. Moore’s body was identified by the draft card he had in his possession at the time of his death.

July 13, 1964: the disarticulated lower torso of Henry Dee was found in the river in the same area as Moore the day before.

November 6, 1964: after an extensive FBI investigation, state authorities arrested James Ford Seale and Charles Marcus Edwards for the kidnapping and murder of Dee and Moore.

January 11, 1965: State officials dismissed the criminal charges against James Seale and Charles Edwards on the recommendation of the State District Attorney.  The motion had stated “… that in the interest of justice and in order to fully develop the facts in this case, the affidavits against James Seale and Charles Edwards should be dismissed by this Court without prejudice to the Defendants or to the State of Mississippi at this time in order that the investigation may be continued and completed for presentation to a Grand Jury at some later date.”

After the dismissal , the FBI actively continued to investigate the murders to no avail.

January 14, 1966,  the subcommittee of the House Committee on Un-American Activities, which was investigating Klan activities, called Seale and nine other alleged Klansmen from the violent White Knights of the Ku Klux Klan. Those called included Seale’s father, Clyde Seale, and Charles Marcus Edwards, his alleged accomplice in the Dee-Moore murders.

The Klansmen repeatedly pleaded the Fifth Amendment, while the chief investigator Donald T. Appell and House members placed into the record what they believed the men had done, including kidnapping and murdering Dee and Moore. (NYT abstract)

In 1998 Thomas Moore, the older brother of Charles, began to work on the case. Then living in Colorado, he wrote to District Attorney Ronnie Harper  asking him to look into his brother’s murder. Harper agreed.

Various media journalists began to look at the story again, including Newsday, 20-20 and investigative reporter Jerry Mitchell of The Clarion-Ledger (Jackson, Mississippi). On January 14, 2000.

Mitchell reported that the murders occurred on federal land. This spurred the FBI to take another look, as the location gave them jurisdiction.

Filmmaker David Ridgen of the Canadian Broadcasting Corporation contacted Moore. Together they went to Mississippi and on July 7, 2005, Ridgen began shooting the documentary Mississippi Cold Case, about the events of Moore’s brother’s murder.

Part of the challenge was that they were operating under the impression that Seale had died, but locals revealed that he was still alive.

July 25, 2006: a federal court granted Charles Edwards immunity from prosecution. In his testimony,  In his testimony, Edwards will say that he aimed a shotgun at the victims while Klan members beat them, that he saw the victims stuffed alive into a trunk and driven away, and that Seale later reported he and others drowned the two men in a bayou of the Mississippi river. (Northeastern article)

June 14, 2007: James Seale convicted by a federal jury on one count of conspiracy to kidnap two persons, and two counts of kidnapping where the victims were not released unharmed.

September 9, 2008: a panel of the Fifth Circuit Court of Appeals overturned the kidnapping conviction of James Seale.

June 5, 2009: an en banc panel of the Court of Appeals upheld James Seales’s original conviction. The defense counsel appealed to the US Supreme Court.

August 4, 2011: Seale died in prison. Thomas Moore, Charles’s brother, who had helped renew the case, said in a statement regarding Seale’s death, ““Rejoicing? That’s not in my nature…. All of that is behind me. I lived through the process. I hope he found peace with his God.” (NYT article)