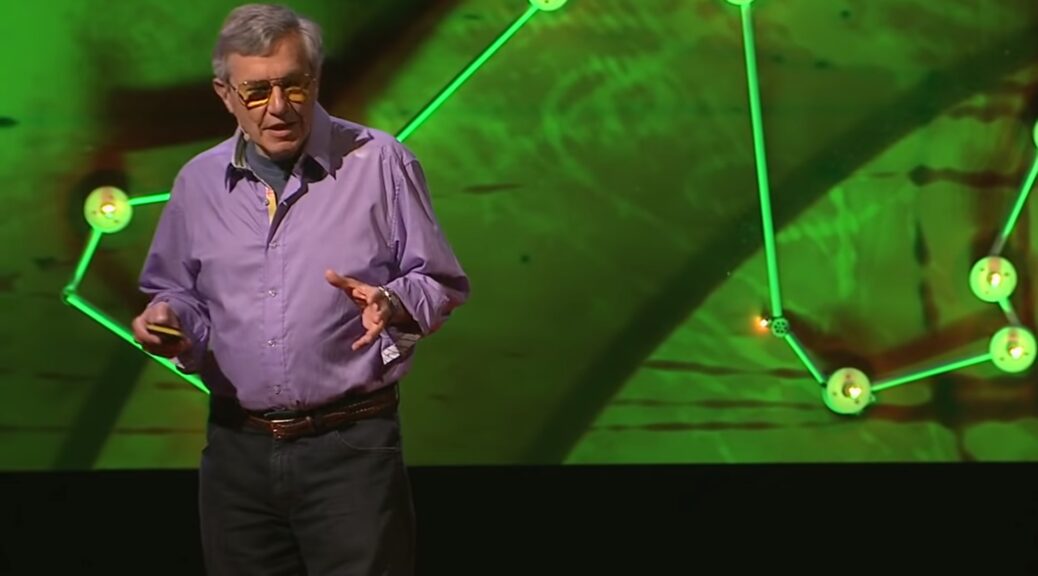 The names of the bands and their songs, whether singles or albums, are the first to become famous. Sometimes the writers or producers or engineers receive the spotlight.

Bernie Krause is a musician, at least that is how the spotlight first found him.

He grew up in Detroit, the son of a lawyer turned businessman and a mother who loved theater and fine art, but hated animals and he himself was extremely allergic to cats, dogs, and horses.

For a year in 1963 became a part of the Weavers, the famous folk group Pete Seeger is associated with.

Krause moved to California and studied electronic music at Mills College. He met fellow musician Paul Beaver and they formed Beaver and Krause.

Robert Moog and Herbert Deutsch had introduced their synthesizer on October 12, 1964 and Beaver and Krause became sales representatives for the Moog company.  Krause described the sound: It made physical contact with you beyond what you were just hearing with your ears. So the room was just, you know, completely vibrating.

As musicians, the two found work incorporating the synthesizer’s sound into pop music. One of the first to use it were the Monkees in their song Star Collector.

In 1967, Beaver & Krause release their The Nonesuch Guide to Electronic Music

George Harrison found the sounds interesting and had Bernie Krause demonstrate it to him. Unbeknownst to Krause, Harrison recorded part of the demonstration and included it on his own Electronic Music album as the tune No Time or Space.

One of Krause’s favorites is the Beach Boys’ Surfs Up tune.

In 1968 Warner Brothers Records pitched the duo an idea: make a whole album mixing together electronic sounds and sounds of nature.

His animal aversions in mind, Krause was not enthused, but he decided to give the idea a try.

He took a portable reel-to-reel recorder, some mic’s, and set off into Muir Woods, a stand redwoods just across the Golden Gate Bridge. In retrospect, Krause said, “When I turned on that recorder and heard the sound of space open up for the first time, it’s magical. The effect of breeze in the canopy of the redwoods.

“Ravens that were flying overhead, you could hear the edge tones of their wings of these  as they flew overhead and off into the distance. It struck me as being one of the most beautiful sounds I’d ever heard.

In A Wild Sanctuary

Beaver & Krause released their In A Wild Sanctuary in 1970.

Paul Beaver died of a cerebral aneurysm in January 1975, at the age of 49, while working on a revised version of The Nonesuch Guide.

Disenchanted with the music scene and all it entailed, Bernie Krause began to travel in search of nature’s sounds. He learned about bird migrations. The sounds of spring. The wolves’ whisper howling.

He returned to school, got a PhD and began to work for zoos, aquariums, and museums.

The more he listened the more he realized he was listening to something special. Not just sounds of nature, but the interaction of those sounds. That each of the insect and animals sought out their own sound niche just as they sought out a physical niche in which to live. The animals were a collective orchestra.

He and Stuart Gage developed a new discipline: soundscape ecology. Unfortunately at the same time he explored and developed this approach, he noticed when returning to various locations that the amount of sound had diminished.  As animal species declined in number or even went extinct, their sound left the score and that absence caused other animals to change or leave the orchestra.

A nearby military base’s jet test flights could change the score. And when the score changed, predators could capture the “out of tune” animal. More  abatement.

All had a negative impact on the nature’s orchestration.  A score unraveled.

In the following TED Talk, Krause speaks about three things:

The Krauses’ home, with his archives, equipment, and all of their personal possessions were destroyed in a wildfire on 11 October 2017.

Though his audio recordings were backed up off-site, he lost his physical archive of sound, 50 years of recordings and notebooks, and equipment.

Links to the main sources for this