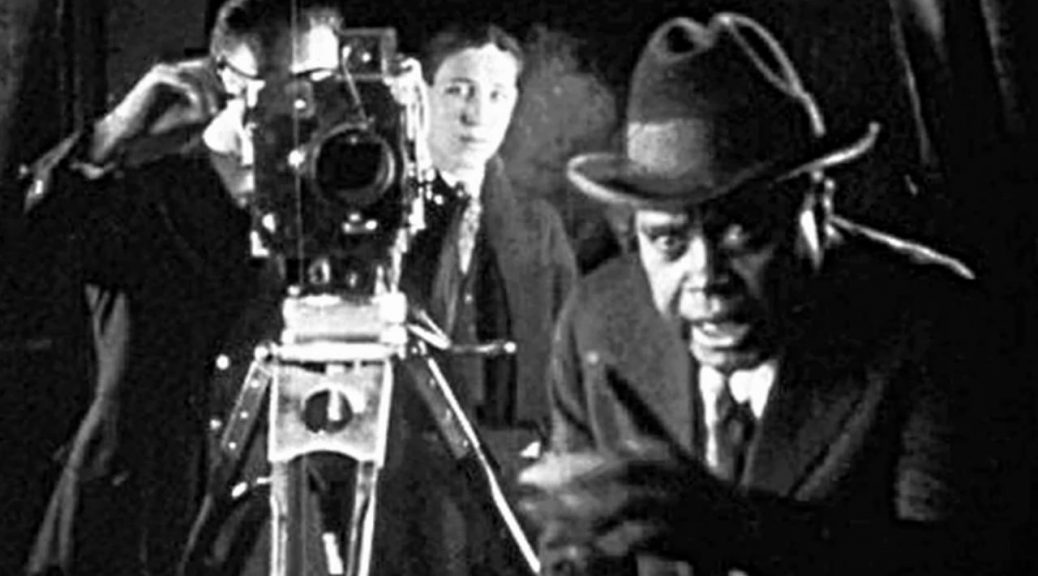 Oscar Micheaux, the son of former slaves, was born in Illinois and grew up in Kansas . When he was 17 he became a porter on the railway, but within a few years left the railroad and homesteaded in South Dakota.

He wrote about his farm life and  self-published The Conquest: The Story of a Negro Pioneer in  1913.  In 1915 he lost the farm.

In 1917 he again self-published a book, The Homesteader.  After a film deal fell through for the story, Micheaux decided to expand his publishing company. It became Micheaux Film and Book Company in 1919.

The Homesteader film was the first film made by an African-American. It starred Evelyn Preer.

Unlike the white-controlled film industry which portrayed blacks with stereotypes, Micheaux’s films had black characters in mysteries, gangster films and westerns. His films were written, directed, produced and portrayed by predominately all black cast and crew.

In 1924 he introduced the movie-going world to Paul Robeson in the film, Body and Soul.

Given the times, his accomplishments in publishing and film are extraordinary, including being the first African-American to produce a film to be shown in “white” movie theaters. In his motion pictures, he moved away from the “Negro” stereotypes being portrayed in film at the time. Additionally, in his film Within Our Gates, Micheaux attacked the racism depicted in D.W. Griffith’s film, The Birth of a Nation.

The Producers Guild of America called him “The most prolific black – if not most prolific independent – filmmaker in American cinema.” In 2008, Patrick McGilligan published Oscar Micheaux: The Great and Only: The Life of America’s First Black Filmmaker.  McGilligan refers to Micheaux as, “…the Jackie Robinson of American film … a Muhammad Ali decades before his time” who “deserves to be considered in the same breath as the sainted D. W. Griffith.”

In his review of the book, Phillip Lopate is critical of McGilligan’s high praise for Micheaux’s work.  He wrote, “…we do a disservice to the achievements of truly superb black auteurs, like Charles Burnett, Spike Lee and Ousmane Sembène, by pretending Micheaux was a great filmmaker. The man had his own validity, as a pathfinder and as the creator of an intriguing, curious body of work, which reveals much about America’s past social and racial contradictions, and its melodramatic conventions.”

Here is his “Within Our Gates” from 1919. It is the earliest known surviving feature film directed by an African American. The Library of Congress preserved it in 1993 from a single print found in Spain.

The story line is that a man abandons his fiance, an educated black woman.  She dedicates herself to helping a near bankrupt school for impoverished negro youths.

Within Our Gates was created in response to The Birth of a Nation which depicted southern whites in need of the Ku Klux Klan to protect them from blood thirsty blacks.

Micheaux showed the reality of racism, where a black man could be lynched for simply being in the wrong place at the wrong time.

Micheaux died in Charlotte, North Carolina while on a business trip. His body was returned to Great Bend, Kansas, where he was interred in the Great Bend cemetery with other members of his family.